About the Farm Managers

Both together and separately, Kate Duesterberg and Will Allen have many years of involvement in the field of sustainable agriculture. Will has taught anthropology and agriculture at the university level and has also farmed his entire life. He was one of the pioneers of organic farming in California and helped start the certification program through the California Certified Organic Farmers Organization. In 1990, Will founded the Sustainable Cotton Project, a non-profit organization dedicated to helping cotton growers transition to organic production, and working with cotton companies to encourage them to purchase and use organic cotton in their manufacturing processes. He is known throughout the U.S. and in other parts of the world as an expert on organic cotton. Currently, he serves on the policy and advisory board of the Organic Consumers Association Will and Kate are both founding board members of Farms Not Arms, an organization dedicated to bringing together people from the farming community to oppose the war in Iraq and Afghanistan. 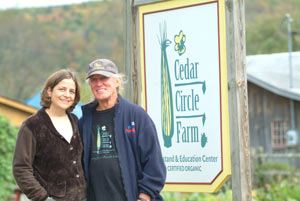 In 2008, Will’s book, The War on Bugs, was published by Chelsea Green Publishing Company in White River Junction, Vermont. He is currently traveling throughout the country, promoting the book and meeting with activists who are anxious to work with him on educating the public about the dangers of the U.S.’s toxic chemical-based agriculture system. The public is becoming increasingly convinced, through efforts such as these, that organic farming is the key to the future health of people, as well as, the environment.

After graduate school, Kate worked with farmers in the Midwest as an organizer with a non-profit group called the Illinois Stewardship Alliance. In that capacity, she and local farmers advocated for legislation at the state and federal levels that would benefit small, family farmers and encourage a transition to sustainable techniques. In Vermont, she worked for Rural Vermont for one year before moving to the College of Agriculture at the University of Vermont. There, she helped organize the UVM Center for Sustainable Agriculture and served as its program coordinator for eight years. In that capacity, Kate directed a New England ide project that focused on training agricultural professionals in the methods and politics of sustainable agriculture. In addition, Kate worked with the Women’s Agricultural Network at the University of Vermont. For three years, she served as managing director for the Sustainable Cotton Project as well. She is currently a board member for the Northeast Organic Farming Association of Vermont.

In 2000, Allen and Duesterberg made their first trip to India where Will spoke about organic cotton at a forum organized by the New Delhi-based Research Foundation for Science Technology & Education, headed by Dr. Vandana Shiva. In 2004, they returned to India for the World Social Forum in Mumbai. Both Will and Kate spoke on workshop panels at the gathering. They participated in a protest of Coke and Pepsi plants that were polluting farmland and water in Kerela. In addition, they had the opportunity to visit numerous farms in Kerela and the Erode District of Tamil Nadu. They have served as consultants to the Armenia Tree Project and traveled to Armenia in 2005 to meet with small farmers interested in converting their operations to organic. Kate and Will remain active in food politics.